well i’m told that this may be the last week of summer release schedule. i know there are some big things already en route and lots coming out real soon too. not that it matters cuz we are so stocked up with great stuff right now that you still could do some serious damage to your finances in here right now…. 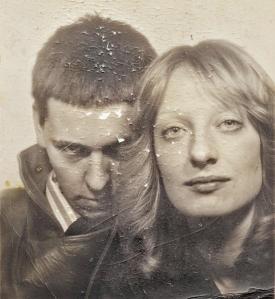 *gareth williams & mary currie – flaming tunes – blackest ever black – lp
– holy wow! this little lost cassette gem from 1985 gets reissued on vinyl for the first time ever. a stunning and timeless sounding album, which is actually something that i think can be said for almost everything that this heat ever did. right, rewind. gareth williams was one of the three members of the mighty this heat. after he left the band and traveled to india, he returned to london and recorded this album. while you can still hear some similarities, this album is a completely different animal. williams sought to create a completely different mood and texture than his work with this heat, and i’d say he was hugely successful in that. on the surface this album sounds much more lo-fi than the this heat recordings, however as you listen and the layers of field recordings, piano, percussion, and vocals reveal themselves to you, you realize that this is anything but lo-fi. gone is the angst and urgency and are replaced with joy and playfulness. i would argue that this is likely the best this heat related release, and possibly given more time with this album, it could be even better than the this heat albums proper… but let’s not get hasty. remastered from the master tapes in 2009, this is the first ever vinyl release of these recordings. can’t recommend this enough, and really, i’m almost out, but hopefully will be getting more.

black eagle child – go around again – under the spire – lp
– acoustic guitars are thoughtfully layered as the foundation while all electric guitars spiral outward. there’s a lot happening here, but it’s put together so well that it never feels like too much. there’s some magical and almost unexplainable about why this music is so memorable. elsewhere, banjos are plucked from the sky with glockenspiel highlights. skeletal rhythms appear and disappear, adding needed accents while his trademark guitar playing zips under the surface.
cat power – sun – matador – lp/cd
– the new studio album from cat power. six years after her last album of original material, chan marshall has moved on from her collaborative forays into memphis soul and delta blues. she wrote, played, recorded and produced the entirety of sun by herself, a statement of complete control that is echoed in the songs’ themes. marshall calls sun “a rebirth,” which is exactly what this confident, ambitious, charismatic record feels like.
eyeless in gaza – butterfly attitude – downward – lp+cd
– stunning new release from these post-punk legends! “described as a “specially-commissioned sister work” to the band’s other new full-length album, everyone feels like a stranger. you get seven tracks on the cd (five tracks on the 12″), all exploring the predominantly acoustic, folk-oriented sound that has been eig’s preference for some years now, with bates’ pungent lead vocals cast in minimalist but muscular arrangements of guitar, percussion, harmonica, keyboards, bass, melodica, organ, banjo, ukelele, steel pans and “morse code”.
panabrite – illumination – under the spire – lp
– norm chambers’ music travels like a deep mental odyssey in a labyrinth of serene echoes. beyond the sounds, there is the sentiment of peacefulness, a cinematic mosaic of colors, flashing in your mind. searching for constant illumination, you slowly float in open space… random sequences of data wandering the sky, quick streams of light buzzing around you, lost in hypnotic corridors leading to new environments, discovering glittering gems… a fantastic trip filled with dystopian drones, analog birds &idm beats. get lost in the light.
*derek rogers – saturations – greenup – lp
– it’s easy to start a drone. but it is difficult to build upon it, develop its themes, and, ultimately, create a true composition from such a nebulous beginning point. derek rogers, with his debut vinyl lp “saturations” as his evidence, certainly attains such a level of creativity as his two lengthy pieces build and collapse, grow and wither with a true musicality. as it spins through its grooves, the album subtly references past works by tim hecker, johann johannsson, and rosy parlane while never succumbing to imitation. he does have some sublime help along the way with trumpet contributions on the a side and violin on the b side, but it is to his credit how he blends and diffuses their sounds into his sculpted layers of distortion, feedback, and time-stretched ambience with such ease.
*ghedalia tazartes – ante-mortem – hinterzimmer – lp+7″
– ante-mortem is one of ghedalia tazartes’ major works of the last 20 years. although simply named 1 to 23, the album bears a collection of very diverse tracks, a couple of them connected in a thematical frame, others simply standing for themselves. what holds them all together is first and all tazartes’ archetypical voice. one could say that ante-mortem contains some of his harshest ever tracks as well as a couple of his most humorous ones. generally it is more than exciting to hear that some parts of ante-mortem could as well have been created around the same time as his masterpiece une eclipse totale de soleil – his music sounds as timeless as it did 30 years ago. nobody else ever sounded like tazartes. ante-mortem sounds like tazartes at its best.