as we head into summer, there are two important things to note… don’t leave your vinyl in your car for long periods, especially in the sun, and secondly, and more importantly… our air conditioning is on full blast all summer and it’s nice and cooooooooool in here.

*fabio frizzi – zombi 2 – death waltz – lp
– “one off pressing of 1000, 140 gm vinyl re-mastered and pressed at 45 rpm for maximum stereo destruction. comes with a2 (42 x 60 cm) poster of cover artwork. the first time this classic soundtrack to the notorious lucio fulci video nasty has ever been made available on vinyl to collectors. this soundtrack is one of the holy grails of italian cinema with the maestro fabio frizzi delivering a dizzyingly brilliant soundtrack that can hold its own with anything released by john carpenter or goblin. cover art by legendary uk poster artist graham humphreys who was responsible for the original cinema posters for the evil dead, nightmare on elm street 1-5 and return of the living dead. exclusive sleeve notes from composer fabio frizzi and renowned italian horror expert stephen thrower.” 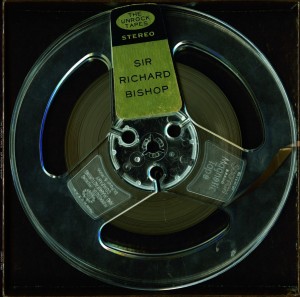 *sir richard bishop – the unrock tapes – unrock – lp
– “after having released records on labels such as locust, drag city and john fahey’s revenant, richard bishop’s…. the unrock tapes… contains eight complete tracks, six of which are highlights taken from earlier tour cdrs that were released on micro-editions years ago. they have never been available on vinyl. two completely new and unreleased songs make this album even more special. bishops guitar playing skills contain a variety of influences. they could arouse the absurd impression that his work has something to do with what one would call ‘world music’. but his playing gets its fire and fascination from being irreverent in bishop’s unique way. the spirit of his former outfit sun city girls is still floating through the album, even if it is not the musical intention, however it gives an impression of an underlying ever increasing and developing personal signature. on the one hand, bishop uses influences respectfully (omar khorshid) and on the other hand his style is typically disrespectful. his guitar playing is delicate and hybrid; because of his subtle skills bishop is able to express himself in a wide range of styles without losing authenticity. that his ragas fray out and end up in distortion and his flamenco sounds arabic, is also part of his game. bishop is a grand-seigneur of the modern american underground and a big part of its substance and integrity. he is a magician with his guitar; still a winking prankster. variable and never too predictable. that is also what makes him special. unrock in its purest form. released in a limited pressing of 500 copies in 140g clear, virgin vinyl.”

so, we drummed up some pretty interesting “reissues” of some pretty major titles that have not been reissued any other way and some of which originals sell for pretty big money. these all look really good and most are on colored vinyl. so many different things, i’m not going to bother listing them all here, but take my word for it, if you are reading this news letter you are probably interested in some of these.