If you follow us on Instagram, you already know that we scored some hot 90’s raerz this week. Well almost everything from that first post is gone, but I haven’t posted this photo that’s this week’s pick of the week yet and these ones are juuuuuust going on the shelf. Not a huge amount of new releases otherwise this week, but still a few nice ones. But that’s ok… the used crates runneth over. 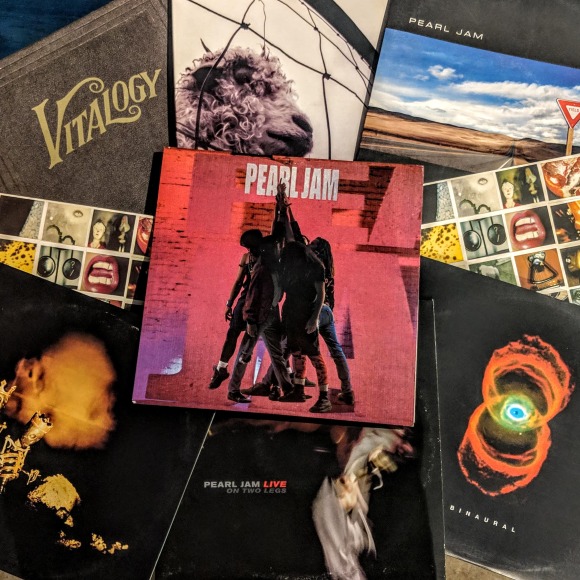 Original Pearl Jam LPs!
Yow! Just a full set of original pressing copies of Pearl Jam’s catalog came in this week. These raerz have come down in price a bit since most of them have been reissued, but there’s nothing quite like an OG pressing, and the pink cover for Ten is so much better than the sepia reissue….treat yo’self! These puppies are first come first served, no holds!

Art Ensemble of Chicago: Tutankhamun (ORG) LP
An avant-garde jazz ensemble that grew out of Chicago in the late 1960s, the Art Ensemble of Chicago is notable for its integration of soulful and chaotic musical styles that span jazz’s entire history, helping to redefine what jazz music could be and continue to seek out its future. AEC’s cornerstone 1969 album, Tutankhamun features performances by Lester Bowie, Joseph Jarman, Roscoe Mitchell and Malachi Favors Maghostut. AMG states that the, “landmark album is one of the most influential free jazz recordings in the ‘60s avant-garde canon.” Previously out of print for over three decades, Tutankhamun has been remastered for vinyl at Infrasonic Mastering and pressed on audiophile-grade vinyl at Pallas in Germany. As a bonus, the reissue features “Tthinitthedalen” Parts 1 and 2, closing out sides A and B, respectively.

Hayes Carll: What It Is (Dualtone) LP
On What It Is, Houston, TX troubadour Hayes Carll is leaving the past behind. “I want to dig in so this life doesn’t just pass me by. The more engaged I am the more meaning it all has. I want that to be reflected in the work,” Carll says. Carll returned to trusted producer Brad Jones (producer of 2008’s Trouble in Mind and 2011’s KMAG YOYO) and Alex the Great Studio in Nashville, Tennessee, to record the 12-track collection, and recruited singer-songwriter, author, and fiancee Allison Moorer as co-producer. The production is adventurous while keeping the focus on the singer and his songs and providing a path for him to go where he wants to go. Where that is, is forward. What It Is covers a broad range of topics both timely and constant; the desire to bridge the country’s political divide, the ups and downs of relationships, and the challenge to stay present in your life as it goes by. What It Is continues the artistic risk-taking initiated by 2016’s Lovers and Leavers; his voice is strong and assured, and his songwriting as truthful as ever. On the rambunctious, fiddle-punctuated, “Times Like These,” he laments political division in America while delivering a rapid-fire plea to “do my labor, love my girl, and help my neighbor, while keeping all my joie de vivre.” Carll’s signature cleverness and aptitude for so-personal-you-might-miss-it political commentary is as strong as ever. The stark, “Fragile Men,” co-written with singer-songwriter Lolo, uses humor and dripping sarcasm to examine his gender’s resistance to change in less than three minutes of string-laden, almost Jacques Brel invoking drama. It’s new musical territory for Carll, and the result is powerful. His voice is strong and resonant on these songs, and it’s thrilling to hear him use it with a new authority. He is alternately commanding and tender, yet always soulful.

Homeshake: Helium (Royal Mountain) LP
Over his first three albums, Homeshake’s Peter Sagar followed his own idiosyncratic vision, a journey that’s taken him from sturdy guitar-based indie-pop to a bleary-eyed take on lo-fi R&B. Now, with Helium, Sagar is putting down roots in aesthetic territory all his own. It comes through not only in the gauziness of the production, but also in the vulnerability of the songs themselves. Everyone Sagar encounters here – including himself – seems to be a step removed from present reality, whether by technology (“Anything At All”), solitude (“Just Like My”), or sweet fantasy (“Like Mariah”). The record is stitched together by a series of instrumental interludes, synthesizer explorations whose haziness adds to the suspicion that this is all an uncanny dream. Where his previous three records were recorded directly to one-inch tape in a local studio, Helium was recorded and mixed by Sagar alone in his apartment in Montreal in early 2018. Freed of the rigid editing process he’d endured before, he was able to lose himself in pursuit of tone and texture. A budding interest in ambient and experimental music pushed him to tinker with the micro-sounds that surround the songs here. It’s a far cry from the chorus-laden guitars of his earlier work. “Ever since I started introducing synthesizers into my music, I’ve gotten more interested in texture,” he says. “I’d hit a creative dead end [with guitars], so synths took over.” The warm chords of a Roland Juno 60 form the album’s base, and gave him a clean palette with which to work. “No tape hiss, no humming power outlets and shitty mixing boards,” as he puts it. “Everything just came out nice and pure.”

Nov3l: s/t (Flemish Eye) LP
N0V3L occupies a sonic landscape that recalls spring-loaded post-punk dissonance, new-wave’s downcast dance anthems, and laser-precise political funk. NOVEL, their eight-track debut EP, is a fluorescent, freshly-scorched declaration of intent, a martial, brutalist slab of nimble melodics and group-yelped anti-capitalist mantras: “Time is a resource/To use and to treasure!” they cry on opener, “To Whom It May Concern.” From the numerics in their name to their black/white/red aesthetic scheme, N0V3L is a carefully-calculated machine. Frigid, wiry guitars scramble and sprint in syncopated riffs, circling each other, sparse and chiming in their aesthetic but frenetic all the same. Percussion is at turns stern and playful, from loose, brash funk strains on “Will To Power” to airtight disco beats on “Natural.” Bass work here, with its own thumping neon flourishes, is not so much an accompaniment but an intricate piece of this web of sounds, as critical and imaginative as the leads it lurks behind. Vocals, typically sung in unison, are sneering and sharp and jagged like the provocations they carry: “Sign on the line/Devalue your time!” they jeer on “Sign On The Line.” Later, on closer “Division,” they lament and reject institutionalized oppressions: “State-endorsed bigotry/Lies from the factory!” It feels crass to call N0V3L a band—the word feels cumbersome and bloated with traditionalist connotations. N0V3L is a self-sustaining creative collective operating out of a house in Vancouver, where they produce their own music, videos, and clothing. These elements converge and convulse to create music that challenges the gluttony and ruin wrought by power, while humming along with kaleidoscopic spontaneity into a tightly-wound audible world that is at once jarring and violently danceable. N0V3L’s debut EP is a call to a burnt-out dance floor, where the dance floor has become a space of dialogue and action and resistance. Please do enjoy.

Steve Reid: Nova (Soul Jazz) LP
Soul Jazz Records are re-issuing the debut album from the legendary Steve Reid in a new double vinyl edition. As a radical jazz artist, Reid played with an extraordinary group of artists – including Miles Davis, Sun Ra, Fela Kuti, James Brown, Ornette Coleman, Lester Bowie, Freddie Hubbard, Jackie McLean, Dionne Warwick, Archie Shepp, Chief Bey, Olatunji, Arthur Blythe, , Dextor Gordon, Gary Bartz, Dee Dee Bridgewater, Sam Rivers, Leon Thomas, Lonnie Smith and Horace Silver! Reid was born in the South Bronx, and grew up in Queens, New York. He played in the house band at Harlem’s Apollo Theatre, accompanying James Brown, as well as playing in Sun Ra’s Arkestra. He lived next to John Coltrane, worked in a department store with Ornette Coleman, had a son who played drums with NWA. He began his career as a teenager in the 1960s as a drummer at Motown when he played on Martha and The Vandellas “Heatwave” (aged 14). At the end of the 1960s Reid was sentenced to four years in jail as a conscientious objector of the Vietnam war. On his release from prison in 1974, he formed the Legendary Master Brotherhood and started the independent record label, Mustevic Sound, to release his debut LP Nova in 1976. This album is released in its entirety and with full original cover art here. Nova was the first in a series of stunning independent records he released in the 1970s. At the start of the 21st century, his career took a new twist when Reid began a successful collaboration with Kieran Hebden (Four Tet). Hebden referred to Reid as his “musical soul mate,” resulting in a number of joint albums. Steve Reid died in New York in 2010. Subsequently the Steve Reid Foundation was set up in his name, to help aspiring musicians and artists.

Sleaford Mods: Eton Alive (Extreme Eating) LP
Sleaford Mods are one of the most important, politically charged and thought-provoking duos currently making their mark on the UK music scene and beyond. They are now poised to release their fifth studio album entitled Eton Alive. The new album, which features 12 new tracks from the prolific artists, was recorded in Nottingham. The record will be the first release on Jason and Andrew’s newly formed label Extreme Eating and their first album since parting ways with Rough Trade Records.

Various: Studio One Black Man’s Pride 3 – None Shall Escape the Judgement of the Almighty (Soul Jazz) LP
Black Man’s Pride 3: None Shall Escape the Judgement of the Almighty is the latest new installment of Soul Jazz Records’ on-going collection of Rastafarian music at Studio One, featuring classic material from legendary roots and culture artists The Gladiators, Horace Andy, Freddie McGregor, Sugar Minott and the Wailing Souls, alongside a superb selection of rarities from Sir Coxsone’s musical empire made up of one-off and practically unknown Rastafarian artists who recorded on a myriad of Studio One off-shoot labels in the ’70s – The Manchesters, Mellodies, The Nightingales and others. In this new collection, we see that once again the prescient Clement Dodd was a man who saw the wider picture. In the ’60s it was Sir Coxsone who identified the creative potential of The Wailers, Toots and the Maytals, Heptones, Burning Spear and many, many others. In the ’70s Studio One released an untouchable selection of the finest as styles moved from reggae to deejay to dub and, in the latter half, the emergence of dancehall. But what is also clear is that throughout this era Studio One released an incredible amount of roots music, and not just the most commercially obvious. For alongside the career-building catalogs of Burning Spear, The Wailing Souls, The Gladiators and so on, one needs to be an ardent Studio One collector to know some of the truly raw Rastafarian music featured here. Groups such as The Manchesters or The Nightingales feel as if they were recorded straight out of the churchical chants of the mansions. Black Man’s Pride explains the links between the ideology of Clement Dodd at Studio One and the Rastafarian faith, which was the creation of Afro-Jamaicans and concerned above all else with a black consciousness and empowerment, a rediscovering of the personal and racial identity of black people. Featured here alongside these classic and rare tracks from Studio One are new and extensive sleeve notes with track-by-track notes by Rob Chapman, author of the acclaimed Downbeat Special and Never Grow Old Studio One books.