We know y’all are busy with back to school, either yourself, or your kids. So the record industry gave you a little break this week and decided to put practically nothing out. Oddly, as if in response, we’ve had a few nice little stacks of used records come in…. so there’s that.

CHECK OUT OUR WEBSTORE!

Goblin: Dawn of the Dead 40th Anniversary Edition (Rustblade) LP
In tomorrow…. “Rustblade presents Claudio Simonetti and his Goblin playing and reinterpreting the score of one of the most famous horror movies of all times to celebrate 40 years of the idolised film Dawn of the Dead directed by George Romero and produced by Dario Argento. The music that accompanies the movie is a mix of prog and electronic rock full of tension and magic tribalism. Piercing guitars, Synth orchestration and virtualism give life to thousands of blood thirsty zombies. Limited Colored Vinyl Plus Gatefold Poster.”

Autechre: NTS Sessions (Warp) 12LP BOX
In tomorrow…. The duo were initially commissioned to do a DJ residency on NTS, following their show from early 2016, but what transpired is closer in approach and results to a super extended Peel Session, featuring stacks of reworked material along with exclusive new notions generated by their infamous ‘System’ of software patches. Given so much time to roam, they explore a full spectrum of meters, tones and alien machine feels ranging from succinct hyper-symphonies to an hour long closing passage of unfathomably deep ambient music, all sequenced with a non-linear narrative arc influenced by the stunning 3rd series of Twin Peaks, and with distant echoes of their seminal, freeform Disengage shows for Kiss firmly in mind. Call it an album, call it a radio show, call it a massive excuse to lock yourself away for 8 hours, either way ‘NTS Sessions’ is a vital dispatch from the North Face models, with material such as the squirming tech-step of ‘North Spiral’ and the slimy electro of ‘Four Of Seven’ from the 1st session, or the footwork-esque ‘Gonk Tuf Hi’ from the 2nd, and the free-floating structures of ‘Cluster Casual’ off the 3rd volume offering some deeply satisfying rhythmic convolutions for the dancers, whereas the preponderance of durational cuts, including highlights such as the hour long ‘All End’, the breathtaking visions of ‘Turbine Epic Casual, Stpl Idle’, and the plasmic wormhole of ’Shimripl Casual’ reach deep into the most abstract, amorphous nooks of their sound in a way comparable with visionary work from Roland Kayn or Iannis Xenakis.

Grateful Dead: Portland Memorial Coliseum (Rhino) BOX
The Pacific Northwest offers up a rich feast of land, sky, and water. It is ripe with influences, abundant with symbols, deep and spirited. It should, therefore, come as no surprise that the Grateful Dead played some of their most inspired shows on these fertile grounds. It goes without saying that the band’s concert on May 19, 1974 at Portland’s Memorial Coliseum qualifies as such. Limited to just 7,500 copies, this superb-sounding 180g 6LP set captures the Dead at the peak of its mid-70s glory, with the group turning in an aptly nature-themed first set (“Black-Throated Wind,” “Scarlet Begonias,” and “It Must Have Been the Roses” serve as natural complements to the adventure-prone tales “Me and Bobby McGee,” “Mexicali Blues,” and “El Paso”) and hitting stride in the second set with an epic “Weather Report Suite” – >”Wharf Rat” that iconically captures the Pacific Northwest’s vibe. Most importantly, the chemistry between Jerry Garcia, Bob Weir, Phil Lesh, and company is on fire. It’s no exaggeration to state that Portland 1974 remains regarded as one of the iconic collective’s finest-ever performances and remained sacred to tape traders for decades. It was also voted the second-best show of 1974—a prime year for the Dead—by Deadheads in the live DeadBase bible for years running. One listen to Garcia’s guitar playing, Weir’s rhythmic accents, or even the delightfully uptempo version of “Loose Lucy” here will confirm such praise as being highly deserved. As with all prior vault Dead live releases, we expect this to immediately sell-out. Secure your copy today and dance with the Dead! 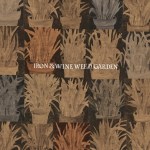 Iron & Wine: Weed Garden (Sub Pop) LP
Iron & Wine follow up their 2018 Grammy-nominated full-length Beast Epic with Weed Garden, a collection of material that began about three years ago. The six-song EP features songs that were part of the writing phase for Beast Epic, but went unfinished. They were part of a larger narrative for principal songwriter Sam Beam, who ran out of time to get them where they needed to be for inclusion on Beast Epic. Weed Garden also includes the fan favorite “Waves of Galveston.” While on tour last fall, the final pieces of material took shape and a sense of urgency prevailed in bringing these characters full circle. To resolution. To completion. In January, Beam and company hunkered down in Chicago at The Loft recording studio to capture these six songs. No more, no less. Weed Garden joins the good company of previous Iron & Wine EP’s – The Sea and Rhythm, Woman King, In the Reins – and in 2018’s attention-span challenged world that’s not a bad thing. Tip-on jacket with insert and download coupon.

Jack Rose: Luck in the Valley (Thrill Jockey) LP
2010’s Luck in the Valley is the third album in a set of recordings that Jack Rose jokingly refers to as his “Ditch Trilogy.” Here, Rose continued his exploration of pre-war American music with new material featuring the Black Twig Pickers, Glenn Jones, Harmonica Dan and Hans Chew along with a handful of solo pieces. This recording set out to capture the energy and feel of the classic three-track shack recordings by the Wray Brothers and Mordicai Jones. Luck In The Valley finds Rose employing new themes and techniques that hadn’t appeared on previous releases. Like all pre-war recordings and all of Rose’s releases, this album was recorded live. It was not created using overdubs but rather by recording a few “takes” and selecting the best performance out of those. Rose stated, “I wanted the songs to have an immediacy and spontaneity as they were being recorded. All the musicians chosen for the record know how to play the songs without overworking the material, but at the same time creating memorable accompaniments on the spot.” Several of the songs are in fact the first takes like “Blues for Percy Danforth,” “Lick Mountain Ramble” and “Woodpiles on the Side of the Road.” Also Included in the set are three covers: “St. Louis Blues,” “Everybody Ought to Pray Sometime” and “West Coast Blues.” All of these pre-war classics are Rose’s unique arrangements. The album title refers to the old red light section of St. Louis and was a code for procuring the services of a prostitute. Says Rose “I read about it on some liner notes to a reissue of pre-war St. Louis recordings and I liked the ring of it.” Luck in the Valley finds Rose at his best surrounded by like-minded friends on a recording that is enriched by a sense of history but entirely new, vibrant and warm.