Well, a relatively light week for shipments this week. That storm in the US hasn’t helped any. But we should have piles of new stuff next week. In the meantime I’ll be putting out another stack of jazz LPs tonight! Come get your dig on!

Six Organs of Admittance: Hexadic (Drag City) LP/CD
“THE SYSTEM builds all of the tonal fields, chord changes, scales, and lyrics on this record, creating the framework for the songs with which the musicians engage. Yet THE SYSTEM is open; within the framework, Chasny’s own personal aesthetics — such as the production mode of loud guitars, the order of songs, the editing of length — were all conscious decisions made to communicate the pieces. The exact same combinatorial patterns used on this record can create infinite results, depending on the choices of the individual. Ben’s years of study have produced an operational agent that has not only built all the songs on Hexadic but is also a system anyone can use to restructure their ways of habit. The first thing one notices when listening to Hexadic is how unhinged it all sounds. The album brews and boils with an ominously dark tone in a desolate space, somehow dense with energy, guitar overdriven past the point of sanity, slamming drum accents, vocals cutting through in what seems to be comprised of another, as yet unheard, language. Yet, inside the apparent wild abandon and destruction is a strict internal logic of construction that unveils itself upon listening. This is the majestic dialectic of Hexadic.” 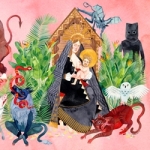 Father John Misty: I Love You, Honeybear (Sub Pop) LP
“I Love You, Honeybear was recorded intermittently from 2013 to 2014 in Echo Park, Los Angeles and produced with Jonathan Wilson, whom I also recorded and produced 2012’s Fairly Fun with. There’s a case to be made that it sounds and acts a bit like solo-era John Lennon, Scott Walker, Randy Newman, Harry Nilsson, and Dory Previn, while taking more than a few cues from Woody Allen, Kurt Vonnegut, Alejandro Jodorowsky and Muhammad Ali. “It has a decidedly more soulful presence than Fear Fun, due in no small part to the fact that I am truly singing my ass off all over this motherfucker. The album is really characterized by the scope and ambition of the arrangements. Nearly every tune is augmented by something special, be it orchestral strings, a mariachi band, questionable electronic drum solos, ragtime jazz combos, soul singers, or what have you. I’m pretty sure there’s a sitar in there somewhere. “My ambition, aside from making an indulgent, soulful, and epic sound worthy of the subject matter, was to address the sensuality of fear, the terrifying force of love, the unutterable pleasures of true intimacy, and the destruction of emotional and intellectual prisons in my own voice. This material demanded a new way of being made, and it took a lot of time before the process revealed itself. “The massive, deranged shmaltz I heard in my head, and knew had to be the sound of this record, originated a few years ago while Emma and I were hallucinating in Joshua Tree; the same week I wrote the title track. I chased that sound for the entire year and half we were recording. The means by which it was achieved bore a striking resemblance to the travails, abandon and transformation of loving someone. There: I said it.” – Josh Tillman aka Father John Misty I Love You, Honeybear was produced by Josh Tillman and Jonathan Wilson, mixed by Phil Ek, and mastered by Greg Calbi. This standard black vinyl edition comes housed in gatefold jacket and includes a fold out poster, listening instructions and an accompanying MP3 download coupon. 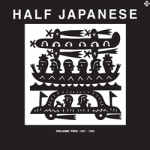 Half Japanese: Volume 2 1987-1989 (Fire) LP
Formed in 1975, this US group has undergone numerous personnel changes since its inception. Despite an erratic history, the unit remains an important outlet for the considerable but anachronistic talents of Jad Fair, who has also pursued a musically indistinguishable solo career. Half Japanese performances were events in the truest sense, often featuring two sets of drums, brass bands, magicians and up to four guitars. Half Japanese’s body of work taken as a whole represents an almost inconceivable playground of diversity and experimentation. However, it should not be a roll-call of distinguished colleagues that provides Jad Fair and Half Japanesewith their notoriety, but the stature of their music and lyrics, which have played a large part in shaping the development of the American underground rock scene (influencing artists such as Beck, Sebadoh and Nirvana.) The Fire Records Half Japanese reissue series continues with the second volume – covering the three releases of Music to Strip By, Charmed Life and The Band That Would Be King – issued one a year from 1987 to 1989. Following the 2014 release of Volume 1: 1981-1985, the next three Half Japanese records come in their original release form, with the additional tracks that were later added to the CD releases over the years available via download code. The LPs are wrapped together in a heavy wide spine outer sleeve with a specially designed paper cut image by Jad Fair, who also provides more illustrations throughout the booklet, with words by David Fair. “Half Japanese assumed it was the greatest Rock and Roll band on the planet. It was often right.” – SPIN

Para One: Girlhood (Because) LP+CD
French producer Jean-Baptiste de Laubier aka Para One (TTC) has loyally composed all of the original soundtracks for French screenwriter and director Céline Sciamma’s films. Para One now presents his soundtrack to Sciamma’s acclaimed 2014 film Bande de filles (Girlhood), featuring an appearance by Frida Sundemo. Presented on LP with CD included.

Sigur Ros: Agaetis Byrjun (XL) LP
A lot of people have one album that changes their lives, something that in some way alters everything after the first moment the hear it. 1999’s Agaetis Byrjun is that album for a lot of people. Agaetis Byrjun (a good beginning), is actually Sigur Ros’ second beginning. Three years previously they released their debut album, Von. After that the trio became a quartet and they evolved into something astounding. As suggested by a lyric from Agaetis Byrjun’s title track, Sigur Ros had bigger ambitions after releasing Von. Agaetis Byrjun gradually grew into a huge commercial success in Iceland, remaining in the top of the charts for over 2 years. Dave and Alex from Fat Cat Records had had their eye on Sigur Ros since 1998 and quickly signed the band to their label following Agaetis Byrjun’s release. The first indication of the critical acclaim the album would receive abroad came with the release of the Svefn-g-englar EP in September 1999. Ecstatic reviews began emerging and gushes like “the last great band of the twentieth century” and “like god weeping tears of gold in heaven” were not uncommon. Agaetis Byrjun became available to the rest of the world in 2000 when Fat Cat released the album in the UK, and in 2001 when PIAS Recordings released the album in North America. Agaetis Byrjun was an album that came literally out of nowhere and seemed to tug at the heartstrings of those who least expected it. No one thought an album by an unknown band of four shy Icelandic men in their early-20s, singing in Icelandic, would become the worldwide music phenomenon it became. The record label projected the album to sell 1500 copies – it has to date sold several million copies.

Swami John Reis & The Blind Shake: Modern Surf Classics (Swami) LP
Death by kowabunga bunga! Swami John Reis and The Blind Shake pay tribute to the classic surf and rock ’n’ roll instrumentals of the 1960s and update the genre for today’s more extreme, modern surfer. Thirteen original modern surf compositions create this tidal wave of booming tom toms, skronking saxophones and a chaotic surge of guitars. Let this south swell topple you, and may you be pinned in its undertow of reverb. Swami John Reis uses a similar aggro guitar approach to his playing in Hot Snakes and Night Marchers but allows the influences of Omar Khorshid, The Ventures, Link Wray, Randy Holden’s Fender IV and forgotten instro combos rise to the surface for air. Joining Swami is Minneapolis’s The Blind Shake (Goner Records, Castle Face), a bombastic power trio consisting of guitar, baritone guitar and drums whose sound has been described as “muscular psych punk.” This collaboration generates a symphonic wall of twang, amplifying the cinematic sense of drama and tension with the addition of saxophone, doumbek, piano, riq, vibraphone and piano. To capture the essence of this vibe, some of the initial tracking was recorded under Crystal Pier (San Diego) by Ben Moore utilizing a mobile recording VW van. Because of the intense rhythmic velocity achieved on many of these tracks, Modern Surf Classics can also be recommended to those interested in BMX, roller skateboarding, snowboarding / toboggan, fighting, yoga, car racing, military and most other water activities (with the exception of SUP).

Switches: I Just Wanna (Switches) LP/CD/CS
Better late than never, these Edmo garage punk’s full length album is finally available! “If you’re going to cover an artist’s career-defining hit, you might want to take a few lessons from Edmonton’s Switches. Their version of Tracy Chapman’s wistful acoustic ditty, Fast Car, is one of the best covers of ANY song EVER — because the Edmonton garage-punks render it almost unrecognizable.  “I had a feeling I could be someone,” Tara McMahon snarls triumphantly as a gritty guitar and an NHL-style organ tussle in the back seat.  Even better, their rendition doesn’t stick out like a Mustang in a fleet of jalopies on the foursome’s new album, I Just Wanna. Their Fast Car sounds like just another one of the gang — you might need a few spins before you even realize it’s a cover — fitting in with tunes about beers, babes and bad-assery. “I just wanna shake it up / My way,” McMahon warns on the title track, a fast ’n’ ferocious number. “I just want her now,” she howls on Ma Cherie, a ’50s-style ballad punctuated with disheveled back-up vocals.  “I don’t need you by my side / But I still want you by my side,” she weighs her options on Stole All My Stuff. There’s no doubt about it: McMahon and her pals — Marlaena Moore, Tamar Dinner and Stefan Opryshko — will steal your heart.” – Edmonton Journal 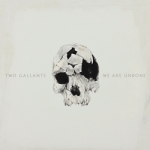 Two Gallants: We Are Undone (ATO) LP
San Francisco based guitar-drum duo Two Gallants return with their fifth studio album, We Are Undone, on ATO Records. While singer and guitarist Adam Stephens and drummer Tyson Vogel have stayed true to the two-person format since their acclaimed 2004 debut, The Throes, their sound has evolved considerably over the intervening years. Following 2012’s The Bloom and the Blight, We Are Undone is the band’s second release on ATO. Thematically, the album ranges from songs that attempt to make sense of the dramatically shifting social landscape of their home town, to the illusion of authenticity, impending environmental collapse, and romantic estrangement. Sonically, the thrash blues of songs such as “We Are Undone” and “Some Trouble” is balanced by the austerity of ballads such as “My Man Go” and “There Is So Much I Don’t Know.” Vogel notes, “I think that with this album, in reference to the albums previous, I think it steps in line with this other sort of expansion of both our personal lives, and our relationships personally. We’re both growing together and in different ways, and learning how to find that balance.”