Oh man, how I don’t miss this week the other 51 weeks of the year. Empty warehouses, hardly any new releases, crumby fills on the orders you do make. Needless to say, there isn’t a whole lot in this week. However, the pick of the week is two of the best records ever made in my opinion, so that’s something I guess…. 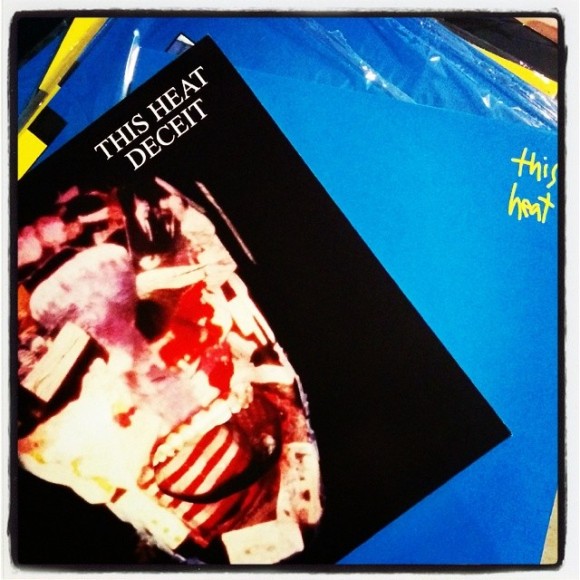 This Heat: s/t (Rough Trade) LP
“This Heat, the band, emerged in early 1976 on the leading edge of what became the New Wave, but they were always apart, more scary and more subtle. Known as the most left-field, and at the same time most hard-edged, band in all of England, their concerts attracted experimental, punk and new wave audiences alike. Just a handful of performances made them the band everyone had to see, and every journalist had to interview. And the more we knew, the more enigmatic they became. This Heat was a passion. The band worked day-in, day-out for years in their own, now legendary, studio in Brixton (Cold Storage – sited in an old industrial meat refrigerator), or they were away somewhere touring abroad. In this hothouse environment, their material evolved and grew, and became increasingly intense; on the one hand more cuttingly simple, on the other more layered and more dense. When their first LP — itself several years in the making — finally appeared on David Cunningham’s Piano label in 1979, with its distinctive blue and yellow sleeve, it acquired immediate iconic status. And over time it has also proved itself prescient; there are musical innovations here that anticipate genres that would take another 15 years to reappear. This Heat, the record was a landmark release. It tore up the book and laid new rules for band composition and performance. The music was without precedent; the musicians uncompromising; the recordings hammeringly intense and the sound deep, radical, and rich. This was music stripped back to the bone but never simplified. And it hasn’t aged.” Seriously, probably my favorite album of all time. OF ALL TIME!!!!

This Heat: Deceit (Rough Trade) LP
“Few will need introduction to This Heat’s second studio album, Deceit. As with Blue and Yellow, it stands out as a high-water mark in the extensive field of post-punk/avant- progressive/experimental rock music dating from the early ’80s. It differs from the band’s debut album inasmuch as the great majority of the pieces are thoroughly composed songs, but the penchant to push the boundaries of sound manipulation is still highly apparent, and at the forefront of their motivations. The lyrics are more overtly political on Deceit and, while sung by all three group members, are most disturbing when delivered by drummer Charles Hayward, in his trademark, barbaric, growling, angrily-screeching manner. This perfectly compliments the musical scenarios as they simultaneously unfold and implode upon themselves in an onslaught of tricky drum patterns, outstanding guitar work and imposing bass thuddery.”

Death Grips: No Love Deep Web (Harvest) LP
In tomorrow… MC Ride, Zach Hill (Hella) and Flatlander have finally pressed their 2nd full length to vinyl after a heavy falling out with Sony. “Death Grips exist within a cloud of hyperbole, from the maximized minimalism of their savage beats and the extreme unrest of their barked lyrics to the escalating gauntlet of their album covers and their blooming disregard of industry standards. To summarize, NO LOVE DEEP WEB– a record ostensibly paid for by a label owned by one of the biggest companies in the world but released for free on the Internet– features an erect penis inked with the title in sloppy Sharpie script on its cover.” – 8.2/10 Pitchfork

Stephen Malkmus & The Jicks: Wig Out at Jagbags (Matador) LP/CD
Wig Out At Jagbags is Stephen Malkmus’ sixth solo effort with the Jicks and finds the former Pavement leader (alongside Joanna Bolme, Jake Morris and Mike Clark) at his most playful and joyous in recent memory. The album, written in Berlin and recorded in Belgium with longtime Pavement and Jicks associate Remko Schouten is a looser, more unbridled affair that gathers those trademark guitar moves and lyrical acrobatics into an amalgam of what SM himself calls: “Projected imaginings of rock and roll from the freezing North, rendered by West Coast stalwarts and a Dutch uncle.”  Malkmus, having lived in Berlin for the past 2 years, combines the manical wizadry of Can (who Malkmus covered on Plays Can’s Ege Bamyasi) and the West Coast imaginings of Jefferson Airplane. Malkmus also cites “Cologne Germany, Mark Von Schlegel, Rosemarie Trockel, Von Sparr and Jan Lankisch, Can and Gas. Imagine Weezer/Chili Peppers, Sic Alps, UVA in the late 80’s, NYRB, Aroma Charlottenburg, inactivity, jamming, indie guys trying to sound Memphis, Flipper, Pete Townshend, Pavement, the Joggers, The NBA, home life in the 2010’s…” as inspiration. As it spans nods to the embryonic days of college rock on “Lariat,” (see those Bongwater and Sun City Girls shoutouts), the galloping guitars and horns on “Chartjunk” and arrives at the rallying coda of “Surreal Teenagers”, Wig Out At Jagbags is a portrait of an American master stretching out and showing no signs of slowing down. 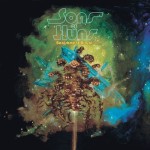 Sons of Huns: Banishment Ritual (Easy Rider) LP
In tomorrow… Hilarious… “Limited edition BLACK FRIDAY RELEASE.” Just a wee bit late there guys! Anywho… In a city like Portland, Oregon, where there are quite literally hundreds of people playing heavy music – and playing it well, at that – it takes a bold, tightly-honed punch to the crowd’s ears in order to stand out. Formed in the winter of 2009 and armed with a full stack of Orange cabs, a lifetime of experience and enough classical training to out-riff any band that dares stand in their SG-wielding path, Sons of Huns have consistently blown crowds away. Peter Hughes (guitar), Shoki Tanabe (bass) and Ryan Northrop (drums) have headlined shows in anywhere from tiny bars to the main stages of Portland’s biggest music festivals, and had the honor of opening for the likes of Red Fang, Andrew W.K., and Danava. Limited to just 500 copies, Cobraside has Turquoise marble vinyl exclusively just for Black Friday 2013!

Zombi: Spirit Animal (Relapse) LP
Zombi’s 2009 album Spirit Animal is a tour de force whose up-tempo moods, patented psychedelic poly-rhythms and bouncing, lush interplay between men and machines ushered in a scintillating new era for the band. With an outpouring of genuine emotion and melody, Spirit Animal gives instrumental music the punch in the gut it needed by blending a genuine sense of warmth and emotion with the darkness the band is heralded for. Zombi’s long out of print third LP is now available as a limited edition blood red colored 2LP-set with bonus song “Infinity” which wasn’t included on the initial pressing.

Zombi: Suface to Air (Relapse) LP
2006’s Surface To Air is the second full-length from extraordinary two-piece Zombi and follow-up to their acclaimed 2004 debut Cosmos. The 5-song set teems with the stirring, trance-inducing deluges of rhythm and sound the duo is renowned for. Swelling waves of melodic synth ride atop a broad bass and drum foundation. Sequences of repetition roll, build, and unfold with the measured patience of master artisans. Less an album than a moving, breathing mass of symphonic sound; Surface to Air creates boundless moving pictures that are nothing short of breathtaking. Zombi’s fantastic sophomore set – home to the cult hit “Digitalis” – is available on limited edition gray colored vinyl for the first time in North America courtesy of Relapse Records.