well, i’m not gonna lie, i’m swamped with received record store day stuff, and all the stuff that is available now, so i won’t bore you…. read on!

this is your last reminder, next saturday, april 20th is RECORD STORE DAY! we are already busy receiving all kinds of cool releases for you to attempt to acquire next weekend. remember, we open at 10 that morning. it’s gonna be a blast. 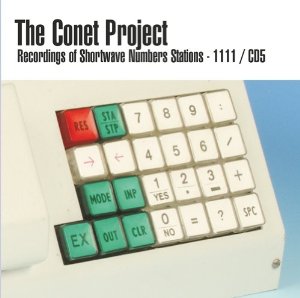 *various – the conet project: recordings of shortwave numbers stations – irdial – 5cd
– irdial announces the release of the conet project: recordings of shortwave numbers stations, tcp/1111″: special 5cd edition. this will be a limited edition shrink-wrapped package containing: 1. the original 4 conet project cds in their own quadruple jewel case. 2. three black-and-white postcards. 3. one full-color postcard. 4. the extended 80-page booklet in its own jewel-case. 5. the new 5th cd in its own jewel case with its own new full-color booklet. the conet project is one of the most influential and important collections of recordings ever released to the public. its original release in 1997 was unprecedented and completely unexpected. no one had heard of “numbers stations” before the conet project, and its release baffled everyone who heard it. but it struck a chord. the unique sonic qualities and astonishing variety of the conet project’s recordings, combined with the clandestine origin of numbers stations and the meticulous research in the accompanying booklet combined to form a release that resonated strongly with people from a wide variety of backgrounds. now 15 years later, irdial-discs is re-releasing this ground-breaking and legendary work in a new updated edition, featuring a fifth disc containing a set of 26 carefully selected examples of shortwave “noise stations” sourced from the private tape archive of akin fernandez, the conet project’s creator. if shortwave radio transmissions were nested like a matroska, the outermost doll would comprise the ordinary government-licensed broadcasts that transmit propaganda and music. next down would be the licensed hams and utility stations used by shipping, weather and hobbyists. then come the numbers stations; the unlicensed and unacknowledged communications from government agencies to spies in the field. innermost of all of these are the completely abstract “noise stations” that have no point of human reference, other than that they can be heard. these noise stations sometimes consist of irregular and rare data-modes, and as such can be put into a context, but in other instances, noise stations have no plausible explanation at all. some are clearly being transmitted because there is a carrier wave and are not natural earth or space noises, but the content of the signal is without any obvious utility. for example, we present a recording that consists only of a loosely rhythmic “clacking” sound, that is similar to a man playing claves. when live on air, this broadcast went on for hours without interruption, only to suddenly cease without any discernible message of any kind. another example is track no. 2, for which we have no explanation. it was only heard once, went on without interruption for at least three days, and then disappeared. it appears to be a highly complex encrypted data mode of some kind, but is unlike any sound normally associated with data modes. a true mystery. as is the case with numbers stations, it is very unlikely that some of the more odd noise station examples on disc five of the conet project will ever have a good explanation provided to the public. this is to be expected. after 15 years, the numbers station mystery has barely unraveled, save for some isolated glimpses into the mechanics of their operation. irdial is privileged to be able to present one such rare and extraordinary revelation with “tcp/1111” which can be seen in the booklet of disc five. irdial has obtained photographs of an actual numbers station voice machine, as was used in many of the former communist block countries. this event is without precedent. somehow, a german man managed to buy a set of these voice generators, and irdial has obtained photographs from him of the outside and inside of one of these machines. this machine’s function is to play sampled voices under the control of a 7-bit asciiI punched paper tape. it is made of widely-available commodity electronic components, and the manufacturer’s name does not appear on the casing; only two serial numbers “3 2620” and “nr.8515” and a handwritten “x1.85” appear on the back of an access panel, with english lettering indicating the rear connector functions. the emergence of this machine raises many questions. who designed and manufactured it? who sold it? why were these machines not destroyed after the decommissioning of the stations? and of course, this is only a tiny fraction of the larger picture. numbers stations and noise stations are a problem and a phenomenon that is ongoing, and that will continue to perplex and fascinate listeners and the curious for decades to come.