well it would appear that the holiday season is upon us once again and as usual things are starting to really slow down for new releases. so to make up for it, we bought a big ol’ beatles collection. lots of beatles albums, as well as a ton of solo and spin off records as well. i’ve listed a portion of them below, but stop in or drop us a line if you are looking for something specific. 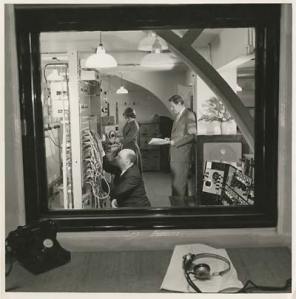 daphne oram – the daphne oram tapes: volume one – young americans – 4lp
– daphne oram, founder of the bbc radiophonic workshop, died in 2003 leaving a colossal archive of reel-to-reel tapes and documents behind. this important collection of material eventually made its way to goldsmiths college, london, who have been administering it on behalf of the daphne oram trust for the last few years. the collection holds over 400 tapes made by oram during her lifetime, and 211 of those have been archived and catalogued by the college so far. the daphne oram tapes: volume one is the result of almost two years spent trawling through the archive in an attempt to piece together a coherent document of one of the most pioneering and genuinely experimental characters in electronic music history. although some of oram’s recordings have surfaced on the oramics compilation, this compilation reveals a complex, dark and sometimes disturbing body of work which has, until now, been partially obscured by the more recognizable radiophonic bleeps and whirrs the workshop is best known for. this first volume focuses on oram’s love of experimental forms, of musique concrète, of the science and mystery of sound and composition. It comes at a time when her work is only just starting to gain wider acknowledgment in scholarly as well as popular circles. the “oramics” machine (the first electronic musical instrument in history to be designed and built by a woman) has gone on display at the science museum in london, an important step in what will no doubt be a sustained effort to assert oram’s rightful position as one of the most important figures in modern music. working through the archive has been a life-changing experience, revealing a wealth of musical treasures that include recordings and sound effects made for stanley kubrick’s 2001: a space odyssey and jack clayton’s the innocents, all the way through to field recordings made in africa. this first volume, put together with the help of goldsmiths and daphne’s family, is the first in a planned series that will, for the first time, make oram’s most important and personal recordings available for public consumption. deluxe quadruple vinyl housed in a gatefold sleeve. highly recommended!!!

olafur arnalds – living room songs – erased tapes – cd
– icelandic contemporary composer olafur arnalds created and released a new song, one per day for one whole week during the month of october 2011. the songs were recorded and filmed live in the living room of his reykjavik apartment and released instantly for free as streamed videos and mp3 downloads. following in the spirit of his critically acclaimed found songs where he wrote, recorded and released a free song every day for a week.
blues creation – demon & eleven children – therapeutic – lp
– “ultra heavy, psychedelic and bluesy hard-rock from japan 1971. this is the second album by this wild sounding quartet, an album that stands as one of the best from japan and is a heavy psychedelic worldwide classic. this reissue comes with the original mega-rare first pressing artwork, meaning gatefold cover and insert.”
einsturzende neubauten – silence is sexy – potomak – lp
– the long-awaited double vinyl reissue of silence is sexy, originally released in 2000. this 2lp version contains the track “pelikanol,” first available as a bonus track with the 2000 release of the album and now for the first time available on vinyl. line-up includes: blixa bargeld, andrew unruh, alexander hacke, jochen arbeit and rudolf moser.
georgia sea island singers – join the band – mississippi – lp
– “the latest in our series featuring music from the alan lomax archives. the georgia sea island singers were a vocal group of unparalleled depth. some beautiful sorrowful accapella songs, some raucous stompin’ & shoutin’ sessions & even a couple tracks accompanied by a drum & fife band along with a banjo player. altogether a nice mix of material recorded in the homes & churches of this small community by alan lomax between 1959 & 1962.”
lego feet – s/t – skam – cd
– skam reissues recordings by the mythical lego feet, otherwise known as legendary electronic duo autechre. this four track cd contains over 70 minutes of classic, mind-bending, futuristic electronic-acid-industrial-cut-up fuckery that, at the time of its release in 1991, was virtually uncategorizable. autechre went on to advance the most seismic paradigm shifts in the sound of the late 20th century, and their seminal early release is presented here with two tracks of material that have never been heard before.
blind willie mctell – trying to get home – sutro park – lp
– “the delta guitar legend’s 1949 recordings originally on regal, re-released on biograph in the 1970s. this is mid-period mctell, finding the bluesman at his best with a pronounced guitar playing that conveys a sense of masterful urgency. features a classic biograph cover. liner notes by down beat’s chris albertson and produced by arnold caplin.” 180 gram vinyl.
no ufo’s – soft coast – spectrum spools – lp
– it seems that konrad jandavs’ debut as no ufo’s was calculated and carefully pieced together to spawn a whole new universe from the omniverse of collective music, a feat which many attempt but few succeed. lazy comparisons to neu! and other such kraut-oriented material have bubbled up here and there, but Jandavs’ vision, as with any great recording artist, is all his own; a new perspective from looking at music past and present.
joel plaskett – ashtray rock – new scotland – lp
joel plaskett – three – new scotland – 3lp
joel plaskett – truthfully – new scotland – 2lp
joel plaskett – emergencys – new scotland – lp+cd
joel plaskett – in need of medical attention – new scotland – lp
joel plaskett – la de da – new scotland – lp
joel plaskett – down at the khyber – new scotland – lp
– first time available on vinyl for a bunch of these, and restocks too. more joel plaskett than you could shake a stick at.
steel an’ skin – s/t – em – lp
– first time-ever vinyl LP release of this steel pan + disco + dub material from the 1970s. this lp version consists of steel an’ skin’s 1979 debut 12″ single reggae is here once again, featuring “afro punk reggae (dub),” a fine disco-dub workout (now a worldwide dancefloor favorite), plus tracks from their 1984 album acid rain.
super djata band – en super forme vol 1 – musique mondiale – lp
– “fan club reissue of the super djata band’s third lp. holy grail for many afro lp collectors, en super forme vol. 1 released in 1982 is testament to the riveting power of the super djata band’s music as one of mali’s or for that matter africa’s true musical treasures. this is a deep and spiritual album, that has hypnotized all that have heard it. limited edition one-time pressing.”
wire #335 – mag
– year end issue of this music mag. lists and stuff.
various – brazilian nuggets volume 2: back from the jungle – groovie – lp
– “delving deep in the underground and peripheries of brazilian rock, groovie records continues to dig up all shapes and sizes of nuggets at various stages of cutting. full of weird’n’garage psych monster themes. obscure tracks by os espioes, avanço 5, diana, giovanne, sonny delane, modern sound six, among others. we tried to keep the spirit of the ’60s punk, full of fuzz and garage punk, rhythm and a bunch of never seen photos and record covers.”
various – jukebox jam! blues & rhythm revue – jazzman – lp
– head of the jukebox jam club night in london dj liam large pulls together some selections from jazzman’s 45 series and adds a further 8 songs.
various – world’s funkiest covers – cultures of soul – lp
– lp version. “carefully selected by deano sounds, world’s funkiest covers features some of the funkiest covers from around the world and throughout time. the album includes a wide range of styles including deep funk, latin soul, hard salsa, soul, afro beat, and cumbia. from the ebony rhythm band’s deep funk cover of ‘light my fire’ to the soulful version of ‘purple haze’ by johnny jones and the king casuals, the unforgettable tracks keep on coming.

and about twice as much more!

as always, thanks for reading….