Alright! Here we go! Weeks of ordering and receiving and plotting and in about 36 hours, all hell is gonna break loose around here. Tomorrow night we’re gonna close up early and completely strip the walls and replace everything will all them glorious RSD exclusives.

AND just in case you don’t get what you wanted, or maybe you don’t want any of the exclusives, all the other records in the shop will be 20% off as well as gear and other accessories.

AND if that isn’t enough we’ll be giving away all kinds of swag through out the day.

AND if that isn’t enough, if you get hungry waiting in line we’ll have some coffee and donuts for the early birds.

AND our pal Jason Dublanko of sKin is coming down to play some music for y’all around pm.

AND IF THAT ISN’T ENOUGH SOMEONE IS GOING TO WIN A $700 REGA QUEEN TURNTABLE JUST FOR SHOPPING HERE ON SATURDAY!

AND if you don’t win the turntable you could still win some cool swag from Local 124 or Cups & Cake Podcast.

Not so fine print… We will be opening at an hour early, 10am. However,  people do start lining up well before that. We do try process this all as fast as possible, but it will likely be crisp out in the morning. Plan to spend a good while outside in line, and dress accordingly. Some exclusive releases are extremely limited, and we have very few copies. Others, not so much. Exclusives are first come, first served and one per customer.

Also, we’ll be launching some new Listen swag on Saturday with some sweet deals on them saturday only…

Various: Wake Up You!: The Rise & Fall of Nigerian Rock (1972-1977)
(Now Again) 2LP+Book
“The Western world was in the throes of peace, love and flower power as Nigeria descended into Civil War in 1967. The rock scene that developed during the following three years of bloodshed and destruction would come to heal the country, propagate the world-wide ideal of the modern Nigerian, and propel Fela to stardom after conflict ended in 1970. Wake Up You! tells the story of this time, pays homage to these now-forgotten musicians and their struggle, and brings to light the funk and psychedelic fury they created as they wrested free of the ravages of the late 1960s and created thrilling, original Nigerian rock music throughout the 1970s. The CD is presented in a 104-page book full of never-seen photos along with detailed liner notes by Nigerian musicologist and researcher Uchenna Ikonne (Who Is William Onyeabor?), with all tracks fully licensed from the bands themselves.” 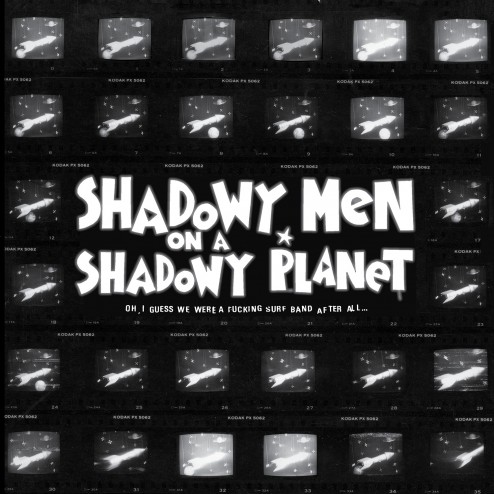 Shadowy Men On A Shadowy Planet: Oh, I Guess We Were A Fucking Surf Band After All (Yep Rock) 4LP Box
Shadowy Men on a Shadowy Planet is the seminal Canadian instrumental combo formed in Toronto, in 1984. They released three albums before disbanding in 1996, reconstituting once again in 2013. Yep Roc Records is proud to be re-releasing all three original studio albums (Savvy Show Stoppers; Dim The Lights, Chill The Ham; Sport Fishin’: The Lure of the Bait, The Luck of the Hook) on vinyl in deluxe gatefold sleeves, with expanded artwork, liner notes by Bon Von Wheelie, Bry Webb and Scott McCaughey, contextual essays by band associates and a chihuahua, and including “Having An Average Weekend”, made famous as the theme to the hit sketch comedy TV show, The Kids in the Hall. This luxurious box set includes an exclusive new LP including tracks from singles, soundtracks, compilations, their trashcan, and BBC John Peel and CBC Brave New Waves sessions. Remastered from first generation tapes by recent Grammy winner Peter J. Moore – all in one box-set called, I Guess We Were A Fucking Surf Band After All…

Various: Don’t Think I’ve Forgotten: Cambodia’s Lost Rock & Roll
(Dust to Digital) 2LP
On April 17, 1975, Phnom Penh fell to the Khmer Rouge and Cambodian rock and roll was no more. Its star musicians were targeted and killed, record collections were destroyed, clubs were closed, and Western-style music-making, dancing, and clothes were outlawed. The deaths of approximately two million Cambodians and the horrors of the Killing Fields have been well-documented; add to this John Pirozzi’s fascinating tale of Cambodia’s vibrant pop music scene, beginning in the 1950s and ’60s, influenced by France’s Johnny Hallyday and Britain’s Cliff Richard and the Shadows. The filmmaker has assembled rare archival footage, punctuating it with telling interviews with the few surviving musicians. Cambodian culture has long been synonymous with a love for the arts. Pirozzi’s 2014 film Don’t Think I’ve Forgotten pays homage to the country’s rock legends who paid for their creativity with their lives. Through the eyes, words, and songs of its popular music stars of the ’50s, ’60s, and ’70s, Don’t Think I’ve Forgotten: Cambodia’s Lost Rock and Roll examines and unravels Cambodia’s recent tragic past. This soundtrack to Pirozzi’s important film, compiled by the director, is very cinematic in nature. The sequencing and newly-remastered audio transport the listener through the rock and roll history of Cambodia in a similar fashion as Pirozzi’s documentary film. It is both entertaining and essential to hear so many tracks that are available outside of Cambodia for the very first time. Includes tracks by The Royal University of Fine Arts, Sinn Sisamouth, Chhoun Malay, Huoy Meas, Baksey Cham Krong, Ros Serey Sothea, Pen Ran, Sieng Vannthy, Va Sovy, Drakkar, Pou Vannary, Yol Aularong, and Cheam Chansovannary.

Various: Hardcore Matinee
(Swami) LP
‘Hardcore Matinee’ is an ode to the budget punk rock compilations that informed a young John Reis, Swami Records head honcho / overlord. While many of these LPs were disposable – they favoured quantity over quality, cramming 40 or 50 unknown groups onto records that crackled and popped with tinny sound and infantile graphics – their cut-rate aesthetic has actually weathered the passage of time relatively well. Call it nostalgia or perhaps a testament to how truly ugly the world has become, but these records can now be enjoyed as curious oddities of a bygone era. It was with this inspiration that Hardcore Matinee was assembled. The compilation features 22 of San Diego’s most exciting groups and covers the wide range of current punk music. From well-established bands such as Hot Snakes (with their first new recording since 2004 and featuring both drummers on the same recording), Pinback (their final recording before disbanding and then reforming) and Gary Wilson (off his recent collaboration with The Roots) to up-and-coming bands Octagrape (ex-Truman’s Water), Death Eyes (hardcore supergroup with members of Rat’s Eyes and Death Crisis) and Schizophonics, this record’s varied styling is a jarring ride. The Swami Records harem is represented by the reformed Sultans (first recording since 2003), Beehive and The Barracudas (first new recordings since 2008), Mrs. Magician (an outtake from their soon-to-be-released second album Bermuda) and The Heartaches (first new recording since their Too Cool For School LP). Other artists include The Loons (featuring Mike Stax of Ugly Things), Rob Crow, Teenage Burritos (Burger Records), Plateaus (Art Fag Records), Creepy Creeps (Dionysus Records), The Widows (Route 44 Records), Ale Mania (Volar Records), Ghetto Blaster (ex-Fishwife and The Let Downs), WHA (ex-Tourettes Lautrec), The Shake Before Us, The Lumps (both on Tower Bar Records) and the debut of The Soaks. In order to stay true to the original compilations’ aesthetic, it was important to keep the music fresh and moving quickly.

Alrighty folks, the part you all really care about, the exclusives. Almost everything is here, some of this is slated to arrive tomorrow, and there’s a few on here that maybe won’t…